A reflection from someone who participated in the Remembrance Ceremony and Soil Collection on March 26, 2022.

I feel the stain today. It was there even when I didn’t consciously feel it; now it has risen from the dark bottom where such truths are covered and lie rotting and stinking. It is here now, in my hand. I hold it. It feels heavy yet it is dried out and dead. The fact is it was never buried correctly.

We didn’t gather silently, speak words to each other in ceremony, acknowledge that what was alive and well is now dead and we are putting it to rest in the earth, in ourselves. We didn’t lay it in the ground, place handfuls of dirt over it, and weep.

We didn’t do this. Instead, like a white mob leaving the victim of their terror for all to see, it was there to keep us silent. And we were. It was dead like the bodies of ancestors who spirits remain, never put to rest. Our silence kept it buried alive as the stink followed us wherever we went. It didn’t matter how far we removed ourselves from the original location, we couldn’t get away from it. That original location, it ends up, is carried within us. Far and wide it is carried, hidden in many lives. Until we stop.  We have to stop. We are stopped, by the sheer force of unacknowledged truth. We get knocked to our knees like we should have been at the original location. Some of our kin were perpetrators, some were behind the scenes supporters, some were bewildered, some hid in silent fear. Many just didn’t speak or act. For generations. Today it sits in our bellies, and makes us stop.

Weep, children.  Perform a proper burial. Gather together and lay that stinking decay in the ground and remember it. Make a marker stating who and what lies here so others can find their way to the location, stand on the spot, read the words and take into their belly the impact. So others won’t have to go searching blind, we’ve marked the spot. We gather there, remember, acknowledge, and turn to face a new future, carrying some of the soil with us to fuel our courage and conviction. Reverence is the nature of our love at this time. With a proper burial, which did not occur for so many victims of terror, we challenge the code of silence, we feel the weight in our bellies, and we do the work to restore humanity to us all. This we do today.

Posted by Mike Dixon at 3:34 PM No comments:

BEL AIR, March 26, 2022 – On this blustery Saturday morning, nearly 200 people of all races and ages gathered at Shamrock Park in Harford County for a Remembrance and Soil Collection Ceremony. A diverse coalition of community members had come together on this chilly, early spring morning to honor the memory of three Black men who were victims of racial terror lynchings in Harford County.
Between 1868 and 1900, three men – Isaac Moore, Jim Quinn, and Lewis Harris -- were accused of assaulting white women, taken from police custody, seized by angry white mobs, and hanged. Their brutal murders at the hands of angry mobs are a part of the county’s history that has been largely ignored and forgotten---until now.
The ceremony took place not far from where Lewis Harris was murdered 122 years ago. On March 26, 1900, a mob seized Mr. Harris at the jail on Main Street and took him to the gates of the nearby Archer Farm. There they hanged him from a Poplar tree and shot him numerous times.
Dr. Iris Leigh Barnes, chair of the Harford County Committee of the Maryland Lynching Memorial Project (HarCo MLMP), remarked that she has spent most of her life in Harford County and was proud of it, but “it is not perfect” and the legacy of racial terror lynchings lingers. “It is important to see that these victims were people—fathers, brothers, and husbands,” she noted. “There are always long-term negative impacts of a lynching…not just for the victims, but for their families, their respective communities, and the greater community-at-large. No one goes unaffected.”
Will Schwarz, president of the Maryland Lynching Memorial Project, discussed the importance of recognizing the truth about racial terror lynchings, and said that we have an obligation to understand how the impact of this racial terrorism continues to manifest itself today, reinforcing themes of Black inferiority and white supremacy. As Mr. Schwarz stated, “You don’t have to be a racist to perpetuate white supremacy.”
As a gesture of respect to the lynching victims, attendees participated in a soil collection ceremony. The Equal Justice Initiative (EJI) of Montgomery, AL, collects jars of soil from places where racial terror lynchings occurred. The jars provide a tangible way to memorialize and hold the stories of African American lynching victims and communities impacted by such violence. As EJI’s Director Bryan Stevenson states:  “In this soil is the sweat of the enslaved. In the soil there is the blood of victims of racial violence and lynching. There are tears in the soil from all those who labored under the indignation and humiliation of segregation. But in the soil there is also the opportunity for new life, a chance to grow something hopeful for the future.”
When Elliot Spillers, EJI Project Manager, stepped to the microphone, he took a long, deep breath and paused for a reflective moment of silence. Shortly afterward, the strong, powerful voice of Minister Eva Taylor of Zion Temple Church filled the morning air, singing “I Am Free.” As the song resonated throughout the park, participants quietly lined up, some with tears in their eyes, to scoop soil into several jars with the names of the three men permanently printed on them. This soil had been collected earlier from previously unmarked places in Harford County where the murders occurred. Officers from the Bel Air Police Department and the Sheriff’s Office Honor Guard stood at attention, paying homage and symbolically providing protection, as the solemn jar-filling ceremony continued.
A jar for each victim will go to EJI’s National Memorial for Peace and Justice. The committee also presented jars to the Historical Society of Harford County and the Hosanna School Museum for educational exhibitions and safekeeping.
Under the direction of Soil Collection Sub-Committee Chair Roxann Redd Wallace, the ceremony also included biographies of the lynching victims; recitations from local youth; a recording of Billie Holiday’s classic song about lynching, “Strange Fruit;” remarks from Harford County Executive Barry Glassman, Bel Air Mayor Kevin Bianca; words and proclamations from the Harford County Council presented by Councilmen Curtis Beulah and Andre Johnson; and participation from several local Girl Scout troops and members of Free State Challenge Academy.
Rev. Ricardo Burns of St. James AME Church Gravel Hill closed this day of remembrance and reconciliation with a prayer. Afterward, Ms. Natasha Jackson delivered a moving rendition of the Negro National Anthem, “Lift Every Voice and Sing.”
Those in attendance agreed that it was a moving, thought-provoking, emotional ceremony---the first step in acknowledging the dark, painful truths of our shared history as we move towards healing and reconciliation through continued, honest conversation. The lives of Harford County’s known victims of racial terrorism --- Lewis Harris, Jim Quinn, and Isaac Moore --- have been forever memorialized.
The HarCo MLMP is preparing for next steps, which include a historical marker; a public-school essay contest with scholarship awards; and a public hearing led by the Maryland Lynching Truth and Reconciliation Commission. If you are interested in donating towards these efforts and/or getting involved, visit Maryland Lynching Memorial Project and EJI for more information.  Also, if you are a descendant of a lynching victim, perpetrator, or witness, please contact us so that we may add to our research.
For more photos see the Harford County Album on Google Photos or view the slide show below
Posted by Mike Dixon at 7:57 AM No comments:

The Harford County Committee of the Maryland Lynching Memorial Project will hold a Remembrance Ceremony and Soil Collection to honor the victims of the three known racial terror lynchings who were murdered in Harford County:

The event, originally scheduled for 2020, is being held in cooperation with the Equal Justice Initiative on the anniversary of the lynching of Lewis Harris in Bel Air in 1900.

The event is free to the public, but registration is encouraged. You can register by clicking this link.

Posted by Mike Dixon at 5:10 PM No comments:

The third annual conference of the Maryland Lynching Memorial Project.

The Maryland Lynching Memorial Project's annual "Lynching in Maryland" conference will be held online this year due to the ongoing public health emergency. This will be the third year we have presented this program.

This year's conference will be held:

One of this year's keynote speakers will be Michael Pfeifer, Ph.D., Professor of History at the John Jay College of Criminal Justice and the Graduate 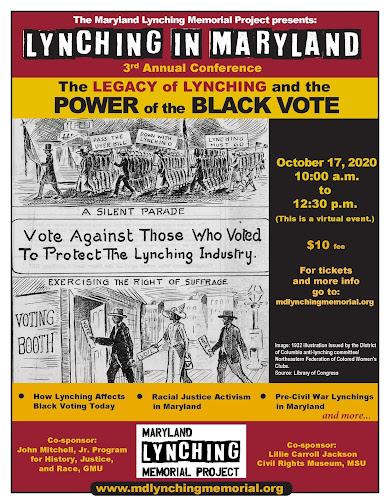 NPR's Ailsa Chang talks to Charles Chavis Jr. of the Maryland Lynching Truth and Reconciliation Commission, which is beginning its two-year investigation of the state's harrowing history of lynching.

Click here to listen to the interview that aired on NPR's new show, All Things Considered, on September 28, 2020.

Posted by Mike Dixon at 7:03 PM No comments: 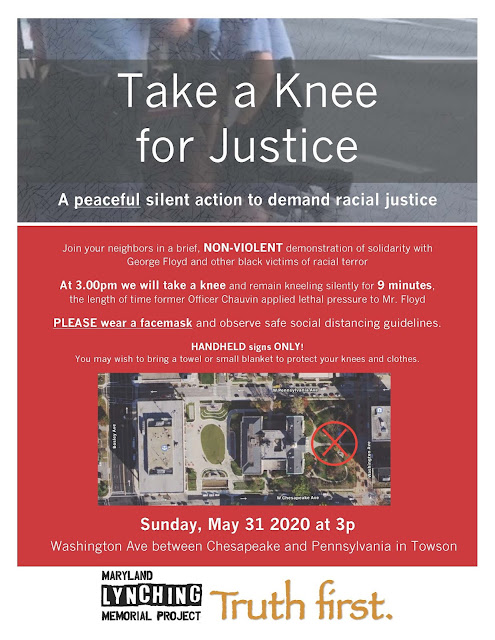 Posted by Mike Dixon at 9:09 AM No comments:

The Harford County Lynching Memorial Committee, established in March 2019, is working to memorialize the victims of this terrible era in the County. The project included plans for a soil collection ceremony in March 2019 and later in the year a marker dedication. However, as the pandemic has resulted in stay-at-home and social distancing orders, the committee's outreach work has been disrupted. Thus, we are using the blog to keep the community informed about our research, plans, and activities. Be sure to follow the blog since we will provide updated content here as we continue our work to document and memorialize victims of these crimes.